I am a Debian Developer and a board member of Free Software Initiative (FSIJ). View all posts by knok →

Anyway, it is a good new for Japanese processing scene.

A presentation slide, named “Attacking against 5 millions SSH public keys – 偶然にも500万個のSSH公開鍵を手に入れた俺たちは” is published, it is a lightning talk in “Edomae security seminar” in Jan 24, 2015.

He grabbed ssh public keys with  GitHub API (https://github.com/${user}.key), the API is obsoleted, but not closed.

On the other hand, such ssh keys couldn’t solve prime decomposition with fastgcd. It means almost ssh keys in GitHub has no bias in almost random number generators implementations, it is a good news.

I tried to make Google::API::Client deb package, it requires Module::Build::Tiny, and dh-make-perl don’t suppot it, so I worte a override code in debian/rules.

More elegant answer should be to add Module::Build::Lite support to dh-make-perl.

This probrem is only wheezy, I don’t need such workaround on sid. Thank you greoga.

In Japan, winter holiday is a special for many people, they go back to their hometown, and take a time with family.

Of cause, I do too. Last weekend I went back to Nagoya and now I still in there. Tomorrow I’ll go to Tokyo and work after this weekend.

I can take a good holiday, and I hope this year is good for everyone.

I had attend 120th Tokyo area Debian seminar at Shinjuku.

An attendee brought hp Jornada 780 and tried to install Debian, so I helped him.

Using a kernel, boot loader and userland from “Lenny on j720” page and it worked fine, except PCMCIA NIC.

His NIC is Corga PCC-TD is not listed in /etc/pcmcia/*. I didn’t have enough time to write it, so I couldn’t check it.

However, later releases after Lenny don’t have “arm” architecuture, so it should be hard to upgrade it. I don’t know recent Linux kernel work on Jornada 780. The configuration and code for jonrnada 780 are still in the kernel, but it wouldn’t be tested anyone.

In the past, I had met with another Germany developer Jens Schmalzing (jensen) in Japan. He was a good guy, but unfortunately he gone in 2005.

I had an old OpenPGP key with his sign. It is a record of his activity, but the key is weak nowaday (1024D), so I stop to use the key but don’t issue revoke.

Anyway glaubitz is also a good guy, and he loves old videogame console. gniibe gave him five DreamCast consoles. I bring him to SUPER POTATO, a old videogame shop. He bought some software for Virtual Boy.

I attend 10th Kernel/VM Explorers (Japanese page) in Sun May 25 at Jinbocho, Tokyo as a audience.

The event awards “The Most Insane Presentation” to @kanorimon. Her presetation was “Implement PDP-11 interpriter”. The implementation is written by Java, and it works to build UNIX V6 itself, yes it is really insane.

She may be 19th or 20th (collage freshwoman), I can feel the future.

At last weekend, I attended to Kanto LibreOffice Hackathon (Japanese).

I could made two achieviements.

Any event is a good trigger for me.

KAKASI 2.3.5 had released. The previous release was over 10 yers ago.

In 2006, I tried to release 2.3.5, but I hadn’t to complete relase jobs. However almost jobs were finished, so it was easy to release for me.

But some bugs are discovered so I’ll release 2.3.6 in a few days.

There were about 6 people in a room. I tried to prepare release of Namazu and KAKASI. 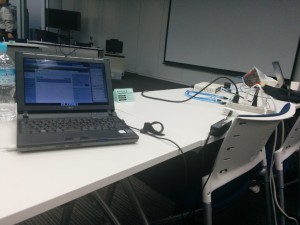